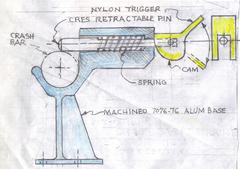 ABC, The designer and manufacturer of the most popular advertising Airships in the world.  The 178 ft. A-170LS  Lightship uses 21st century technology on its 70 ft. by 30 ft. Video Screen. During my 6 month contract through Aerotek, I brought their Blimp Drawing Package up to date by incorporating hundreds of Engineering Change Requests, In addition to some of my own. This for the purpose of having the Department of Defense consider the airship.

Due to drag imposed by the external advertising screen, on the port side, modifications to the vertical rudder were made to offset the airflow. Using SOLIDWORKS 3D Software, with a design from Engineering, I drafted the sheet metal TAB, CLIPPED RUDDER, OUTER, that would remedy that, in addition roughly a dozen other aluminum sheet metal and plate weldment drawings. 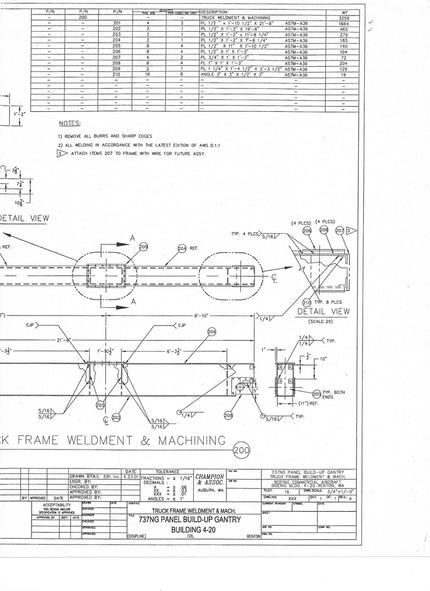 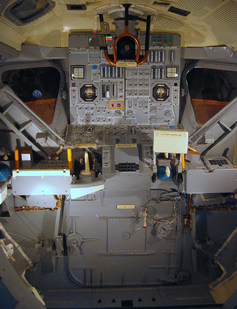 On a contract with ESP, I was assigned to draw the entire structural steel Drawing Package for a large GANTRY CRANE (132 feet wide by 34 feet high) that ran on railroad ties There was enough room inside the main girder, that a human could walk through it. the project was for the Boeing Co., used in the manufacture of the 737 WING PANEL BUILD-UP.

Two of the five E size Engineering Drawings are depicted below. 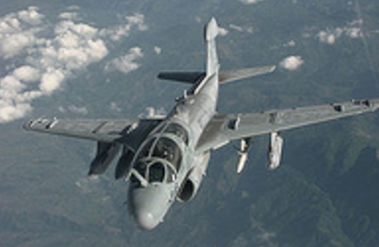 As one of two Checkers, responsible for checking the Engineering Drawings of approx. twenty Drafters, the workload was intense. Checking for form, fit, and function required the Drafter submit the Drawing file as well as attaching hardware drawing files, to check compatibility. The equipment was Deck Machinery on a Drill Ship. Huge weldments, like the 30 ft. high Blow Out Preventer Transporter. This Robot like Transporter carried  this huge safety device on rails, to the square hole going thru the entire ship (The Moonpool). which also provided the insertion of drill piping from the huge crane above. Drilling over water 12,000 feet deep required thousands of lengths of pipe which were stacked, picked, and transported to the crane by high speed carts on track.

AutoCAD was the computer Design/Drafting software, which afforded the checking process precise investigation. Hundreds of thousands of dollars were saved by preventing incorrectly Designed/manufactured parts.

HAND DRAWN ON DRAWING BOARD 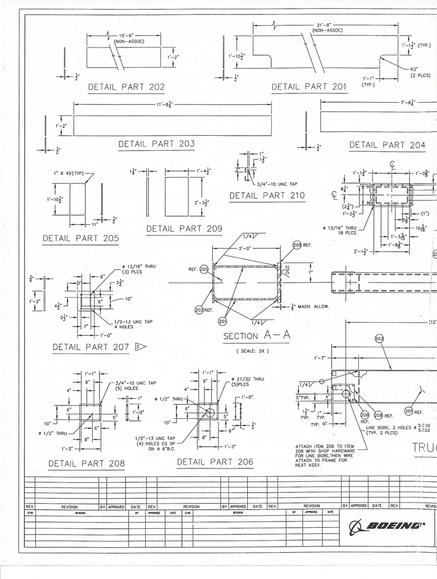 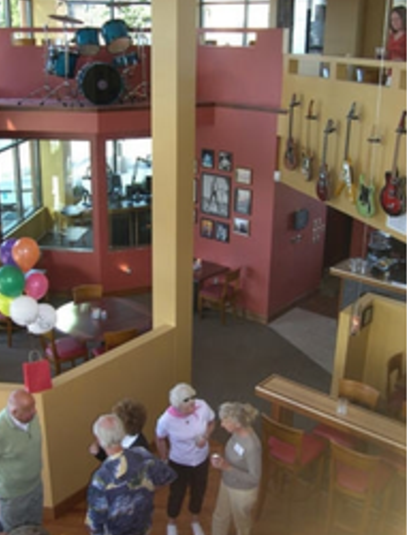 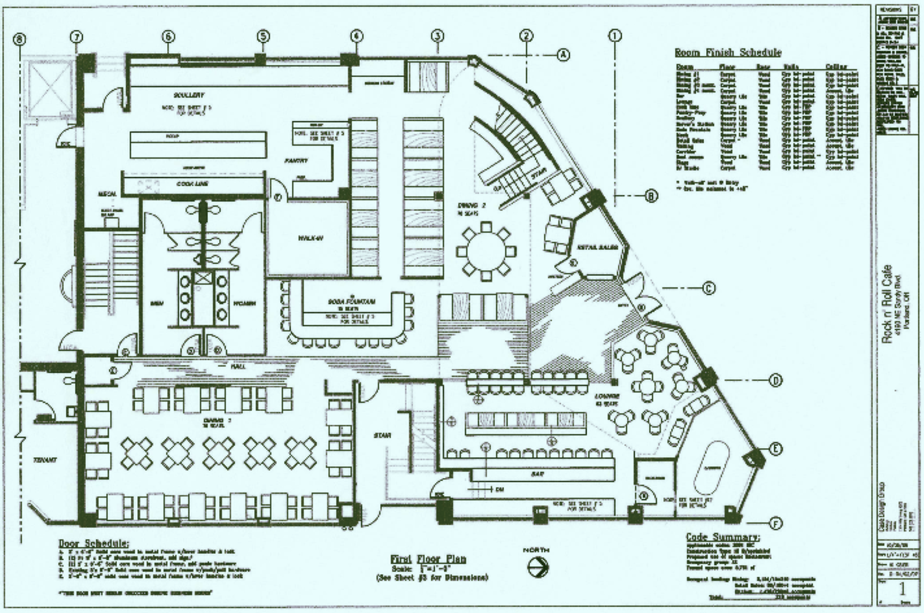 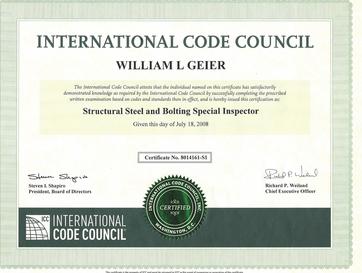 First Floor Plan. For the rest of the Drawings for the Case Group R&R Café, see Architectural Plans Page. 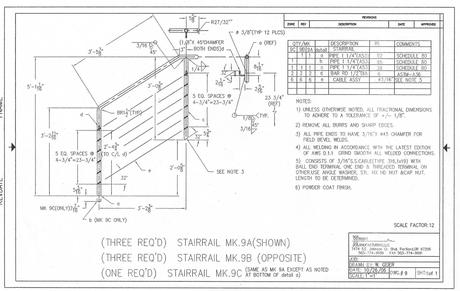 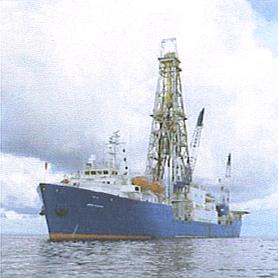 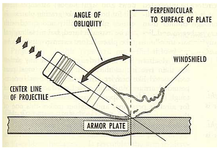 I designed and drafted the four landing winding stair that Meier-Herzog Auto wanted in the middle of their showroom. It was constructed of mild steel with concrete filled treads for quiet  strength. The AutoCAD drawing package consisted  of the final assembly (below) as well as twenty weldment sub assemblies incorporating over sixty detail part drawings (including Guard Rails and Hand Rails) 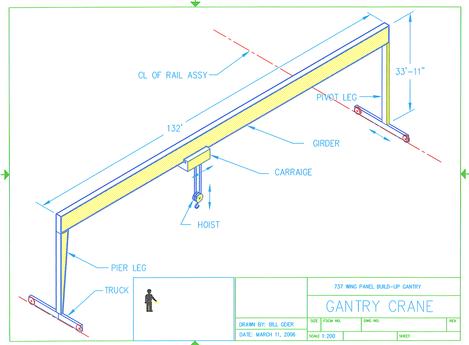 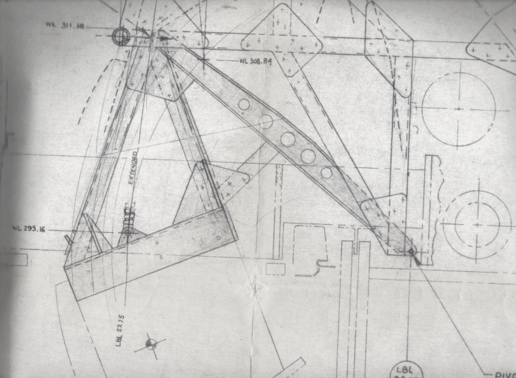 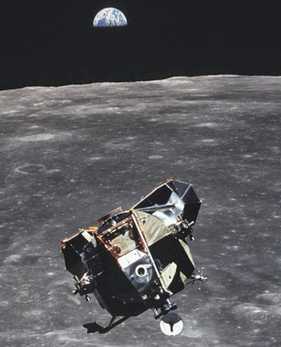 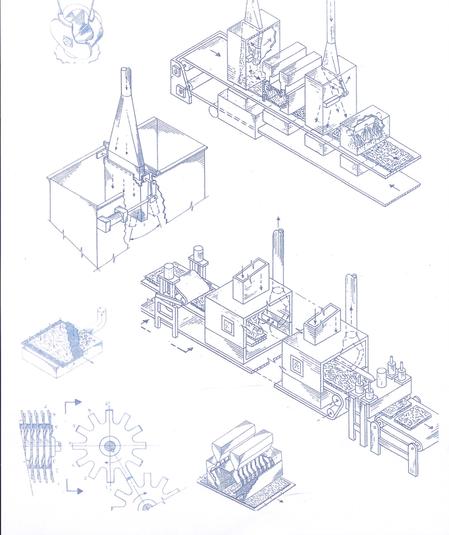 The Cruise Missile incorporated stealth technology and a terrain contour matching guidance sytem that carried a thermonuclear payload. Each B-52 Bomber carried twenty such missiles. Difficult to track, the thought of thousands of such small weapons must be augmented by todays versions traveling at 7,000 miles per hour.(ie. NASA's X-43A Hypersonic 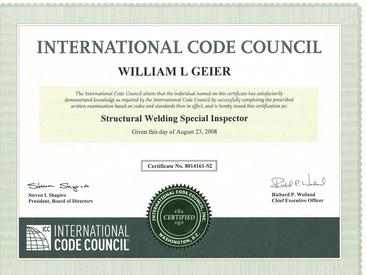 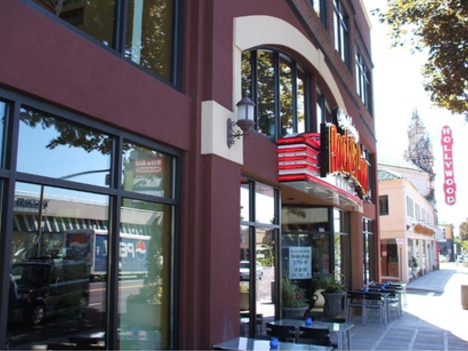 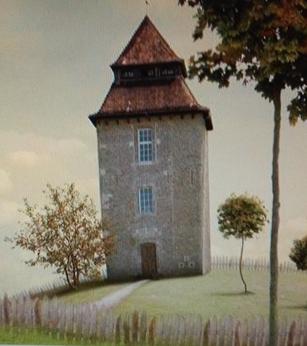 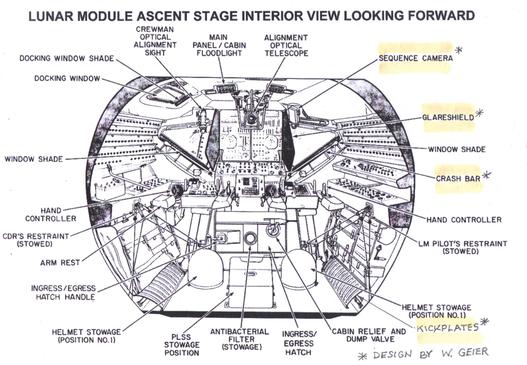 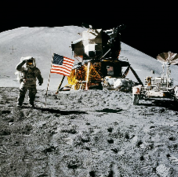 Switching to Military Aircraft .Design, I designed Black Box (electronic) installations in equipment bays, as well as the Auxiliary Canopy Release for the EA-6B, an Electronic Countermeasure aircraft . Designed off an A6-A all weather interceptor frame, with two additional crew. Designed in the 60's, through electronic improvement it still flies today. It was a relatively simple cable and pulley system attached to pneumatically operated linear actuators. A flexible handle from the pilots center console allowed deployment without putting excessive loads on the console. 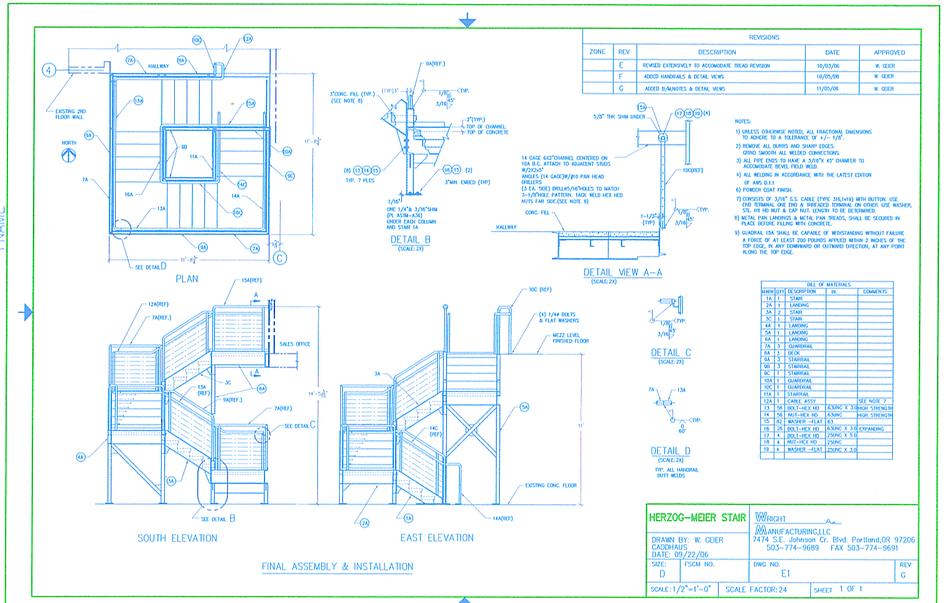 A COMPILATION OF VARIED ASSIGNMENTS BY WILLIAM GEIER

Design reviews were one of the most exciting aspects of the Apollo Project. Myself and a couple other Designers would go to the massive white clean room, where six LM's were standing. We would don white jumpsuits, and white gloves and boots. Then enter a two door vacuum chamber, to be vacuumed. Once inside, you looked up at the towering LM's. They appeared to be Martians from 'War of the Worlds" with their landing legs and triangular eyes (windows). Then its time to climb the scaffolding surrounding the craft. Climbing thru the hatch, and standing on the flight deck of the vehicle that was going to the moon was exhilerating. Looking down was the first time I saw Velcro. Then it was time to get out onto the catwalk because the Astronaut team was approaching. We could observe them inspect our designs through the window. That's when I saw the Astronaut give a thumbs down on the GLARESHIELD. I had noticed that it hadn't been installed properly, but do not know the outcome ,because I was transferred to military aircraft.

I remember a sad time when we found out about the three Astronauts that had died in a Command Module fire, during a test launch (without liftoff) They would not come back for reviews. I observed the company performing flammability/emission tests in windowed chambers afterward, trying to assess and decrease potential toxic gases (particularly Nylon and Velcro emissions). These were the prominent cause of the Astronauts deaths, not the fire.

Mark Lindsay was the lead singer for the 60's Rock Band, Paul Revere and the Raiders .It was a good sound and they did well. Mark decided, years after the band stopped playing, to build a Celebrity Restaurant celebrating Rock and Roll.

The Rock & Roll Café was to remodel a beautiful old building in the historic Hollywood District. Pay homage to the genre, and have a Rock Radio Station on the premise.

The group of businessmen behind the adventure choose famous local Architect Carter Case to shepard the project.

THE CASE GROUP, did continue to bring it to fruition. Carter Case choose CADDhaus, to implement his vision, in a CAD Drawing format. The entire drawing package can be seen on the Architectural Plans page.

020,000 Feet     Aimed through one of Eagle's two triangular windows, a 16-mm movie (SEQUENCE) camera captures the moonscape as Armstrong and Aldrin's craft moves forward and downward for a landing.

They were standing in the LM, Velcro on their boots to keep them adhered to the deck. They had cable harnesses holding them, but it was possible for heads to break the windows in a hard landing, hence the CRASH BAR, which would be swiveled into place across the windows just before landing. 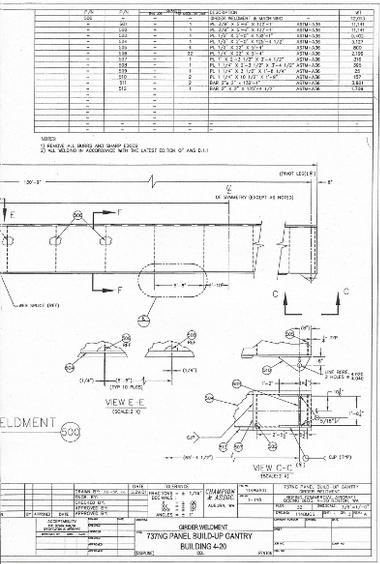 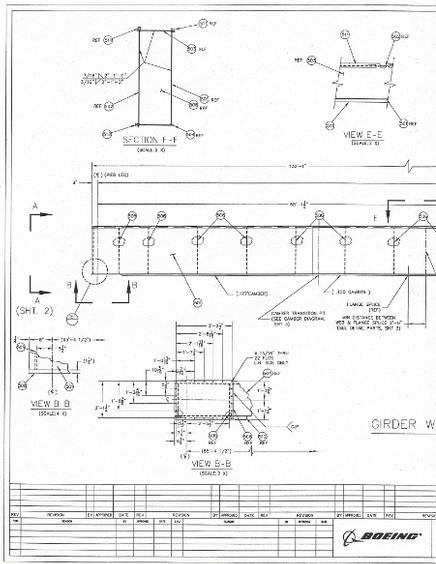 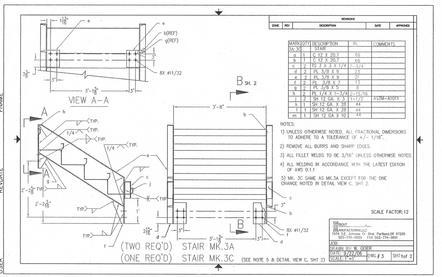 Having worked for Sundstrand as a Mechanical Engineer 1972-79, I was contacted in 1983 by the Engineering Corp of America, with a request by Sundstrand to take a contract position for a Drawing Checker. Sundstrand's Drawing package for its Cruise Missile Electro-Mechanical tape guidance system had been rejected by the Air Force. It did not meet DOD and MIL SPEC requirements. The Drafting Manager refused to even talk to the Air Force Officer, who now had a office down the hall from me.

The equipment had been built, and required no form, fit and function checks, just that the Military Drawing specification be met. I checked and red lined changes, which were performed by the twenty or so Drafters. It was quite tense ,

I laisoned with the AIR FORCE Officer to ensure the changes were sufficient. in a few months the package was resubmitted and accepted.

SOLIDWORK's 3D drawing of the above Bracket Base (from memory, All Drawings were done on a drawing board back then).

Besides hardware design, I also was involved in Human Factor Studies, involving removing scientific equipment from external bays, after landing.

This old and worn photocopy, is of a TV Monitor Installation Proposal that I designed for Sundstrand Data Control. This was to be to be submitted to The Boeing Co., in a bid to get the final contract.

We won the bid and I continued to design a much more sophisticated mechanism, (A telescoping rectangular tube) with the help of an Electrical Engineer,Stress Engineer, and Mechanical Engineer who designed the electrical motor driven rack and pinion system.

The project was for the King of Saudi Arabia's conference room in his executive 747.

I worked on interior designs, entertainment systems, furniture, galleys and stowage bins for a number of executive aircraft.

William Geier, Mechanical Design Engineer, Crew and Equipment Integration Group, Lunar Module                                                      The image of the view through the triangular window of the Lunar Module ( LM) ( far right)shows the CRASH BAR with its articulated bracket connection. The bracket/mechanism that supported the bars in their deployed and stowed positions is depicted in this preliminary sketch.(right).  Hours of Descriptive Geometry were needed to define the various planes of the structures surrounding the windows. Besides this, I designed the bracket and installation of the camera that took this picture, the SEQUENCE CAMERA.

Myself and another Engineer designed polycarbonate KICKPLATES, that protected thin webs in the bulkheads. I had to take over a GLARESHIELD design from someone who was transferred. It is never good to take over someone else's ideas. During a Design Review, the inspecting Astronaut rejected it.

During the Vietnam war, the North was sending most of it's supplies to troops in the South via the Ho Chi Minh trail. This took place at night for cover. To stop that, a barrier of troops and electronic devices were planned along a line called McNamaras Wall. Part of that was the use of night flying aircraft with low light emission monitors scanning the trail. They chose to modify an existing anti submarine aircraft, the Grumman S-2 Tracker. It was painted black, and fitted with advanced electronic surveillance equipment.

It was supposed to fly very low, spot movement, come back for another pass and deploy cluster bombs They expected much small arms fire from below and decided to heavily protect the crew with composite fiberglass/ceramic tiles on the floor, and titanium plate on the sides (interior) . I was chosen to design the Armor Installation. Once the angle at which they expected rounds to hit the plate was provided,(angle of obliquity) I rotated that about the Pilot and Co-Pilot's head, producing a cone of protection. Where that cone intersected the aircrafts fuselage, determined the plates configuration. The titanium side plates ended up like hill shaped shields, the crest blocking half the visibility of the side windows.

After months of work the armor was manufactured and was being installed, then the project was cancelled. We heard about it when I was out in the shop with the installation crew. 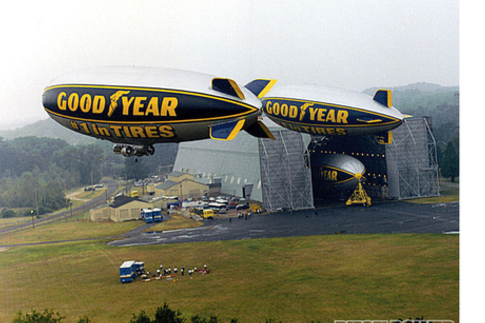 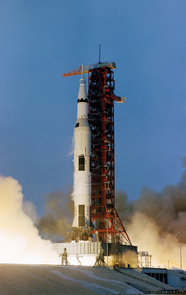 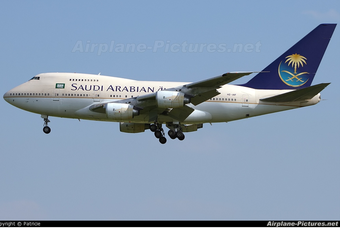 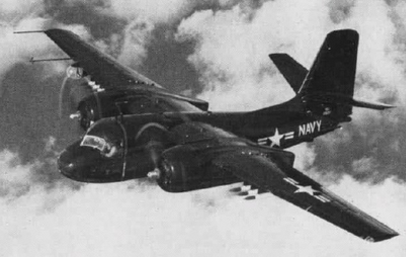 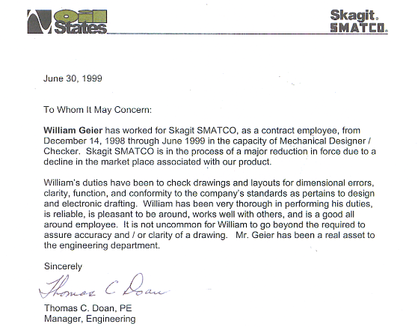 Talk about going from aircraft to Heavy Machinery ,Design Drafting for the Robbins Company takes it to the limit. I worked as a Drawing Checker for Ingersoll Rand's Rock Drill Division, checking for Form, Fit and Function.  Every Engineering Drawing to be released must be Checked, that is a copy marked up in red to incorporate changes indicated. After the Drafter does so, The Checker signs the Drawing. No drawing is ever released without being signed by the Checker in the Title Block.